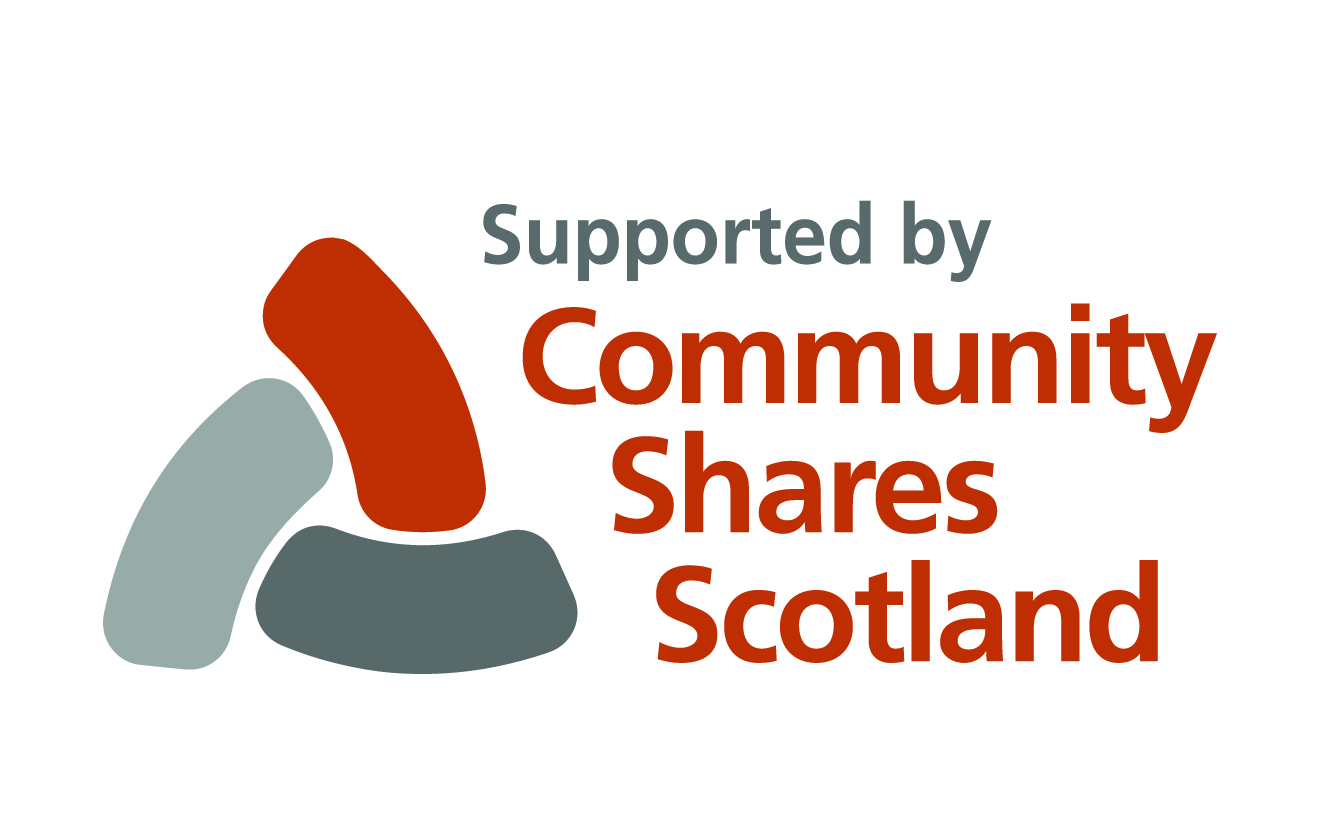 Welcome to our Community Hydro Scheme.This run-of-river hydro scheme was commissioned on 31st January 2018 after many years of effort by local residents.

It is expected that the scheme will generate around £2 million over the 20-year life of the project.

The scheme has been built on the site of a Victorian Hydro Scheme that was installed to supply electricity to Barnaline Lodge. Care was taken during the build to protect the remains of the former powerhouse and what is left of the old Hay Maryon Turbine. A section of the old riveted pipe can be seen alongside the new 1200mm diameter GRP pipe.

One problem faced was that the local water supply was taken from the old sump and ran through the old pipeline route. This complexity was turned into an opportunity to upgrade the whole intake and pipeline with a new 160mm water pipe, which runs alongside the Hydro pipe. It diverts off to the Water Treatment Plant at the top of the hill above the Powerhouse. New valves have been installed, a scour pipe added, and an isolation valve installed by the water treatment plant. 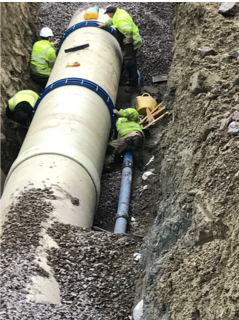 Final section of pipe being laid
with the Community Water Supply pipe running alongside. 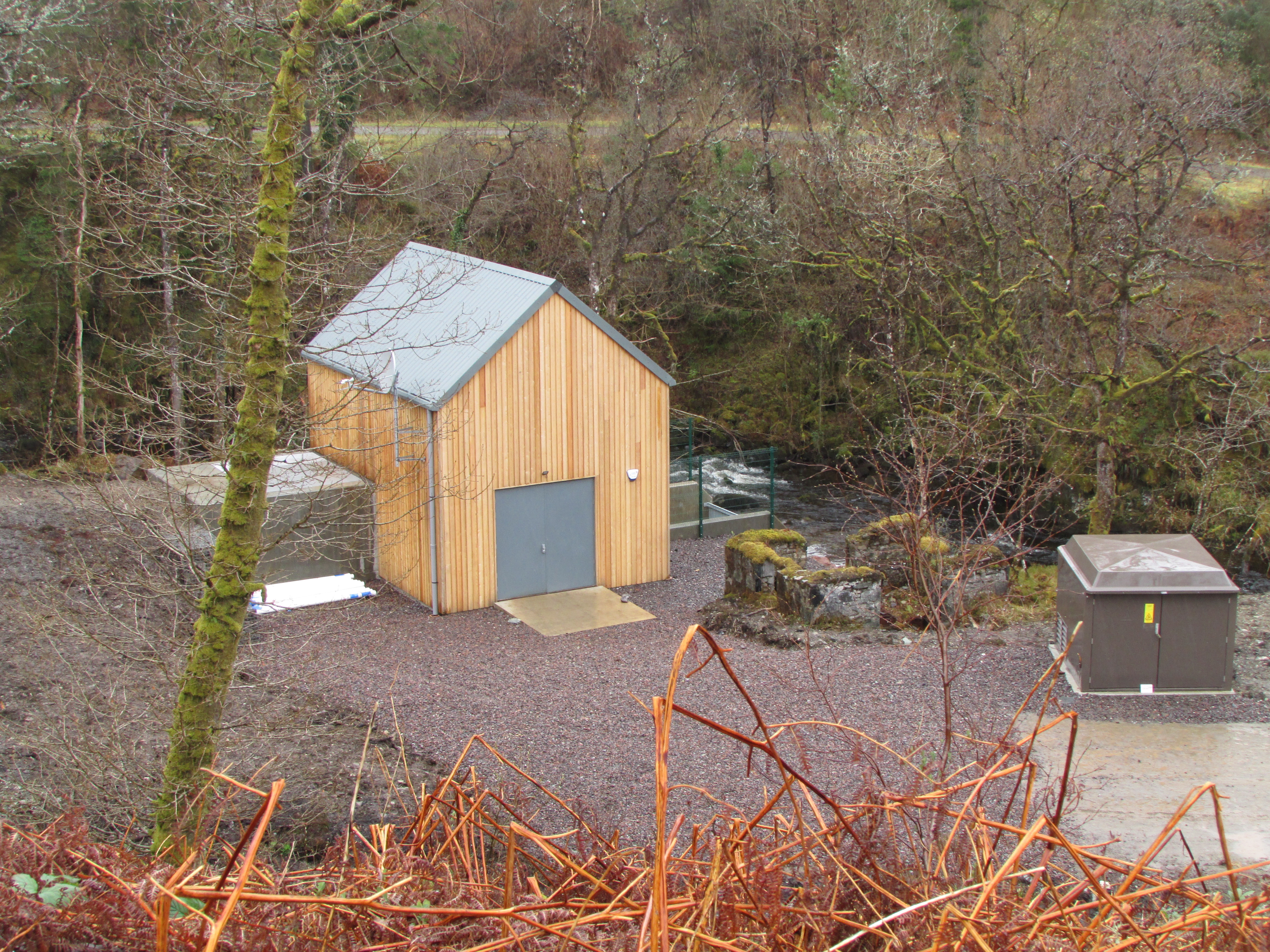 The new powerhouse, seen from the footpath above. 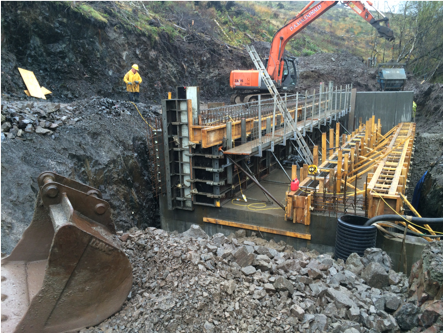 The new intake is situated alongside the Victorian Weir and just above the original intake site. The original sump was 3m3 and had a channel diverting water to it from the weir.

The new intake chamber is 3m deep x 5m wide x12m long and holds 180m3 which is roughly 60 seconds supply. It is limited to abstracting a maximum of 35% of the water in the river.

By installing a 160mm water pipe we have futureproofed the supply.

A special feed pipe outside the Hydro Intake chamber ensures that even in low water the local water supply is maintained. This part of the solution was nearly compromised by the discovery of the old compensation pipe in the weir. It has now been closed to ensure that water is always available to the village

Our turbine is a 350kW Crossflow turbine, designed and installed by Czech company CINK Hydro-Energy ks. It cost €260,000 including delivery and installation and was installed in November 2017.

Inside the Powerhouse, is the Control Panel showing the current day's generation.

Because of Grid Curtailment (limitation on how much electricity can be released to the Grid), our turbine is hard limited to 350kW to ensure that we cannot go over our agreed failsafe level. This means that in high water conditions the turbine will reach about 345kW and then gradually nudge up to 350kW. The turbine will keep generating until the water level drops to 0.5mts or the turbine efficiency drops to 10%

The old turbine, which is still visible in the remains of the original Powerhouse, was supplied by Hay Maryon & Co of London, who according to the 1922 Who’s Who in Engineering manufactured Turbines, Pelton wheels, oil pressure governors, and complete hydro-electric plants.

The old system is believed to be late Victorian although we have not yet been able to find any specific data about this.

For a relatively small installation this was a difficult project, with all sorts of barriers and obstructions over and above the difficulty of working in a small space, in difficult terrain.

Add the challenge of protecting the community water supply, unseasonably high water levels throughout the build, and tight timelines and you have a sense of the determination and commitment of the people involved

Dalavich Improvement Group and Awesome Energy Dalriada would like to thank everyone who helped to make the scheme happen.